The first birth I attended as a doula was over 13 years ago. Rebecca, my college roommate, my best friend – the first one of us to fall in love, the first one of us to get married, was also the first one of us to get pregnant. I can’t remember whether I’d heard of a doula before that time but I had always been the go – to among my friends for sexual health information and this seemed the next logical step. I attended a DONA workshop and got hooked. Rebecca went into labour one evening in mid-April – she went out to dinner and started feeling some feelings she thought might be contractions and decided to sleep on it. Aaron her husband called me around midnight to say the game was on and that they were timing contractions but wanted to stay at home as long as possible. I took the first bus in the morning (did I mention they lived in Hamilton while I lived in Toronto?) and went straight to the hospital to find Rebecca neck deep in water in an awesome step in bathtub the likes of I haven’t seen before or since. It was leaking all over the floor but no one seemed to care and the nurses had dumped a bunch of towels on the floor to contain the worst of the mess. Rebecca was coping well at that point, already in labour land and not very chatty (not like her usual self at all.) I can’t remember specifics anymore, I remember at some point they got her out of the tub and checked her and the news was not encouraging. I remember the nurse telling Aaron off for eating a sandwich. I remember Rebecca eating skittles and drinking Snapple Iced Tea. I remember how very hot it was! At some point the decision was made that an epidural would be a good idea so she could sleep as she was very tired and at that point she had been in labour for 24 hours with no end in sight. The epidural immediately transformed her back into the chatty vivacious person she usually was but the nurse turned off the lights and suggested we all get some sleep. At this point the woman in the room next door gave birth loudly which was a little discouraging as she’d only checked in an hour or two previously and we’d been there all day. Yes yes I know birth, like yoga, is not a competitive event. Still. She had obviously invited her entire family to be there as they all soon congregated loudly in the hallway, chatting and laughing in some eastern European language that we couldn’t understand. Time passed, Rebecca slept, and the epidural worked its magic. They must have turned it down at some point as the next thing I clearly remember is Rebecca wanting to push, feeling the urge to push and no nurse came running when she pressed the call button. I stuck my head out the door and flagged one down “Uh, she feels like she wants to push, can she push?” Pushing seemed to last forever with not much progress. She pushed on her side as it was the most comfortable but the baby just didn’t seem to want to come out. The nurses called in the OB and assured us that she was the best, if anyone could get this baby out she could. They thought Rebecca could use some help and decided to go for a forceps assist. At this point things got real. Rebecca was wheeled down the hall into a brightly lit room with a ridiculous amount of people in it – I counted 17 including us. I remember holding her hand while the OB got out what looked like giant salad tongs. I remember the horrible words “I’ll just make a little cut” and then “Push – push hard!” and the doctor bracing her foot against the table and then skinny purple legs and the most beautiful cry. At this point we realized we’d left the camera in the other room and I dashed off to get it. Aaron was shaking so hard he was afraid he was going to drop the baby, so the nurse handed her to me. My first time holding a newly born baby. I can’t believe she’s a teenager now, how does that happen so fast? 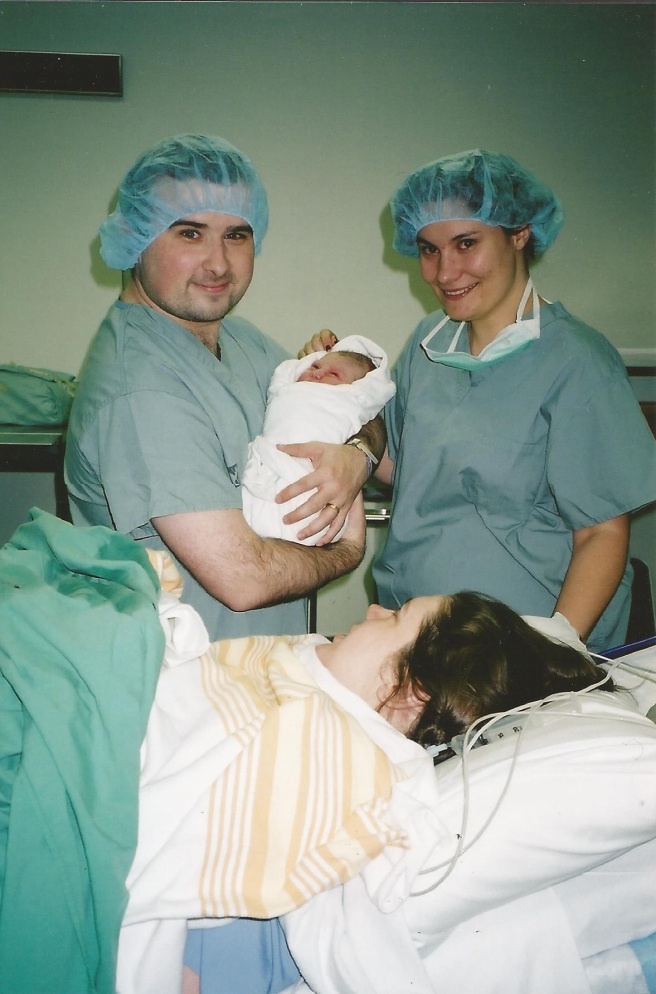 Looking back I didn’t know at all what I was doing. I had attended one workshop, had no first hand experience of pregnancy and childbirth.  I am so grateful that Rebecca and Aaron allowed me to join them on their journey into parenting.